A small rope production facility starts up in the village of Ruisbroek in the Klein-Brabant region in the province of Antwerp specialising gradually in rope based play equipment parts.

The family business becomes a limited company with the name Klein-Brabantse Touwslagerij (KBT).

KBT moves its location to Sint-Amands where the first new facility of 1700 m² is built. The main market is Belgium and in the Netherlands an agent is promoting KBT products.

KBT starts cooperation with CDM trading company (Chris De Mey) and gets its first imports from China. Plastic, metal and rubber items are added to the range of play equipment parts.

KBT invests in production of plastic slides in Leeuwarden (the Netherlands) through a joint venture with 2 Dutch partners.

KBT develops its sales area further into Europe (France, Germany, UK, …) and the range of products is growing rapidly.

KBT builds a new 1500 m² warehouse opposite the existing one in Sint-Amands. Meanwhile yearly growth is more than 25 %.

CDM Ningbo is established as the first joint venture for production in Ningbo (PR China) in cooperation with a local partner.

KBT Poland is established with a sales office in Warsaw (Poland), with Lukasz Dzienisz in charge to serve Eastern Europe. In the same year KBT wins the “Export Vlaanderen” Export Award for the province of Antwerp. 85 % of the turnover is now for export.

KBT Australia is established as a joint venture with a local partner in Melbourne (Australia). Meanwhile in Belgium a new warehouse and office building is built by CDM group. Total storage area including warehouses in the Netherlands is now 10.000 m². KBT is present in 35 countries.

CDM Far East is established as sales office in Hong Kong to serve the Asian market and to handle overseas exports. Ningbo Best Swing is established as a second joint venture in Ningbo (PR China) to acquire 10.000 m² of industrial area with the purpose of building a new factory. Meanwhile in Belgium Aramo holding of Chris De Mey buys out Fortis Private Equity and becomes sole shareholder of the group in Europe.

KBT Argentina is established as sales office in Buenos Aires (Argentina) with a local partner in order to develop the South-American market.

CDM Uruguay starts up as a hub with the same joint venture partner from Argentina. KBT Poland moves into a central distribution warehouse in Lodz (Poland).

Increase bvba is established by Aramo holding as a consulting company within the group with the purpose of product development for the group and for third parties, advisory services regarding standards and certification to the industry and the local authorities.

Ningbo Best Swing strengthens its management with a local factory manager and a European QA/QC manager.

Aramo holding, CDM and KBT celebrate together with their Chinese long term partner 20 years of presence in China.

Chris De Mey sells the majority of his shares in Aramo holding in an MBO operation involving 3 key managers in the group. KBT ATW nv is established with 4 shareholders with long standing experience in the market of playground equipment.

Blue Rabbit Play, LLC located in Atlanta (Georgia) is established as a distributor for KBT ATW group in the USA. The company is commercialising a range of ASTM certified KBT items customised for the US market.

KBT Foundation vzw is incorporated as a charity organisation providing playground equipment for children in developing countries. KBT Foundation is focusing on small scale projects in local communities in Asia, Africa and South-America. 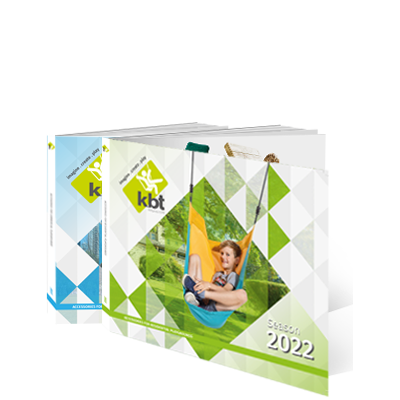 Any questions about our B2B products? We're here to help.